I read with growing disappointment an Op-Ed piece on ‘Religious Hatred’ over on Lib Dem Voice. The central premise of the article was a fear, based on a Muslim News article, that Ed Miliband was going to outlaw criticism of Islam. I agree that such a law would be a serious erosion of civil liberties, however, that’s not what Miliband was proposing.

Let’s rewind a little for context.

‘Hate Crime: Should the Current Offences be Extended‘ was a review conducted in 2013, and for which the final report was published in May, 2014. In short a more in-depth review was recommended in the final report, but generally, some of the the conclusions reached were:

…most – if not all – of the benefits that might come from extending the aggravated offences could flow from the properly applied and accurately recorded use of the enhanced sentencing system.

… the current under-use of enhanced sentencing could be having an adverse effect on community confidence and victim satisfaction. This may be contributing to the under-reporting of hate crime.

So this is a dialogue about applying the existing enhanced hate crime sentencing system properly, and recording the results. In particular, responses from various organisations to the Commission stated that there:

…was a sense of inequality in the current system and of the need to send a clear message that hate crime is taken equally seriously, whichever of the five protected characteristics the hostility relates to.

Could it in fact be this consultation that Miliband is alluding to when he says he’s going to tighten up laws around hate-crime?

The simple answer, folks, is “Yes”. But how do I know this?

In an interview with Jewish News, Miliband said he was going to tighten up the hate crime laws to protect against anti-Semitism.

Over on Pink News Miliband sells the idea of strengthening hate crime laws to combat bullying and discrimination against the LGBT community.

…will make disability hate crime a specific criminal offence. This will better recognise the impact of hate crime and ensure the system has a mechanism to punish those who commit hate crimes against disabled people.

The Muslim News article directly quoted the Labour Manifesto as saying “… we will strengthen the law on disability, homophobic and transphobic crime.” As yet there has been no article on Lib Dem Voice complaining of a trammelling of the right to criticise Judaism.  And we know that hell would – rightly – freeze over before any self-respecting Lib Dem would question the wisdom of protecting the LGBT or disabled community from bullying.

The question begs to be asked: Why highlight, in particular, the protection of Muslims from hate crime as being an attack on free speech? The backlash against such a – straw man – proposal on the most-read website for Lib Dem supporters was fairly intense, perhaps because the Op-Ed itself totally decontextualizes the fact that the same legal protections being offered to the Muslim community were also being offered by Labour to the Jewish, LGBT and disabled communities.

But why decontextualize in that way? Isn’t that a sure-fire way to lose votes from the Muslim community?

The 2015 election is tight. Every vote matters. Political parties that draw broad-based support a diverse range of communities are more likely to win, and will be more resilient to adverse events, like, say, being part of a deeply unpopular coalition for 5 years.

Ed Miliband is explicitly courting the votes of a number of the most marginalised communities in our country. With a single policy that could deeply affect the way those minority communities are treated in law Miliband is ensuring the Liberal Democrat vote is further suppressed across a diverse range of people.

They say a picture speaks a thousand words. Here is a picture that should make a few Lib Dems pause for thought. 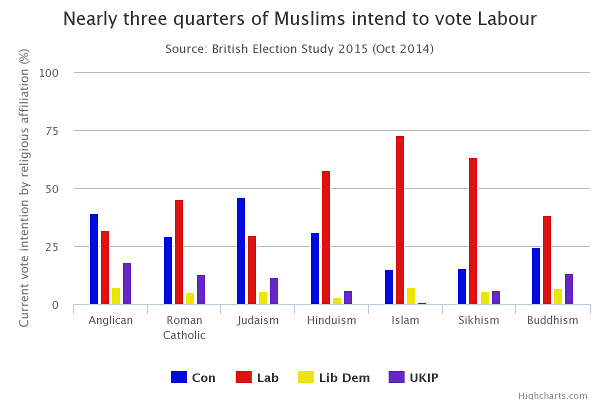 Why is it that the Liberal Democrat vote amongst many religious communities in the UK is so suppressed? Could it be that articles like the one published on Lib Dem Voice lead many Muslims, Sikhs, Hindus, Jews, Buddhists, etc, to think that the Lib Dems are not serious about protecting them from religious hate crime?

I understand that in the white hot heat of a campaign the desire to shut down an opponent and point out that a particular policy is deeply wrong or illiberal, but the knee-jerk reaction by the Lib Dem Voice community against that mere idea that Muslims should be offered further protection under the law is unfortunate at any time. But so close to an election and when so few Muslims are Party members or supporters, or who actually vote Liberal Democrat, it’s self-defeating.

It would have been far better to have taken a deep breath and realise that stronger protection for minority communities, as in this case, does not necessarily equate to the absolute removal of free speech.

Wouldn’t a more appropriate angle of attack on Miliband when he says he’s going to start recording Islamophobia, anti-Semitism and hatred against the disabled and LGBT communities as distinct and specific crimes would be that that’s unequivocally A Good Thing, but that he’s only suggesting what has already been recommended by a Coalition Government report anyway?

Rather than being an opportunity to halt illiberal legislation designed to stop criticism of religion, this was in fact a chance for Liberal Democrats to look at the evidence for extending existing legislation to better protect not only religious minorities, but also the LGBT and disabled communities.

This is not really that complex an issue. The Muslims in the UK that I know simply want to enjoy the same freedoms and protections as everyone else. It’s really very simple. If you want to lose membership subscriptions and votes from the Muslim community, carry on targeting them as not deserving of the same rights as the other members of society.