By Jason Mehmet on October 14, 2010 in Business, Technology

This article was first published on October 14, 2010, at The Online Marketing Mix. 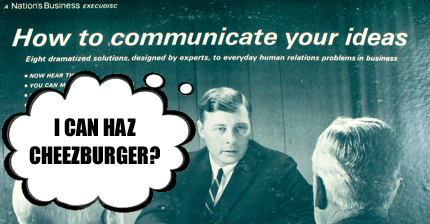 Some of the most successful marketing campaigns use memes to embed a message into the consciousness of the people receiving the meme, but what exactly is a meme, and how and why would you use one?

There is no single consistent definition of what constitutes a meme (rhymes with “cream”), but at it’s simplest a meme can be considered to be a “unit of cultural information”. Examples of memes include an idea or behaviour, or maybe a catchphrase or a tune. Richard Dawkins coined the term “meme” in his book “The Selfish Gene”.

People who are very serious about the study of memes will tell you that memes can be considered the cultural equivalent of a gene. Like a gene, a meme can propagate itself. Like genes, some memes will become highly successful, surviving and spreading, and perhaps even mutating, whilst other memes are less successful and will become extinct.

Some of the most popular memes may not even make much sense at first. Take for instance the “All your base are belong to us” meme, or the “I can has cheezburger” meme, or the “keyboard cat” meme – with nearly 10 million YouTube viewings – that quickly mutated into the “Play him off, keyboard cat” meme. Consider also the Brett Domino meme which has been doing the rounds for a while and which Radio 1 DJ Chris Moyles has recently been propagating breathing new life into the Brett Domino meme.

As you can see, memes can be a hugely successful way to spread a thought or idea, and what is marketing about if not spreading thoughts and ideas? But how can you turn the power of the meme to your own advantage? How do you create a selfish meme?

Hugely successful memes very rarely appear to overtly have anything to do with a specific brand or company. But this does not necessarily mean that brands and companies are not engaged in the business of creating and distributing memes for competitive gain.

Have you heard of comparethemeerkat.com? The success of this meme is hard to put a finger on. Can you imagine the marketing meeting where the idea of comparing meerkats was proposed? It was undoubtedly a risk to build comparethemeerkat.com in the hope that people will remember comparethemarket.com, but it is a risk that paid off and is heavily backed up now in social media as ‘Aleksandr’ the meerkat has a Facebook and Twitter account.

Hollywood offers us great examples of meme marketing. Take a look at flynnlives.com which – amongst other things since September 2009 – offers a sneak preview of the Tron Legacy movie which will only hit cinemas in December 2010.

The ‘I can has cheezburger’ meme is the foundation of a very successful website which generates revenue through advertising. Brett Domino performs songs, but note that he also makes clear many of the brands and instruments he is using, could he be earning sponsorship money?

A really successful meme in terms of branding is the ‘Will It Blend’ meme, which at first glance appears to be about blending various items, but the meme is owned (if one can own a meme!) by Blendtec, an organisation that sells blenders and mixers. If nearly 9 million people tune in to watch you blend an iPad (let alone any of your other videos) you can bet a fair few of them will keep you in mind when it comes to blender purchase.

As you’ve seen from the examples I’ve given, a successful (or ‘viral’) meme doesn’t have to be overtly commercial, nor does it need to be particularly high-tech or even slick. In fact, a meme that has a slight element of cheesiness about it could work to your advantage.

The one thing all memes have in common, be they videos or peripheral websites or social media campaigns is that they are creative and original.

If you can create a meme that is highly creative and that people can take and make their own (like cheezburger cats, blending stuff, or ‘play him off’ keyboard cat), or which they can participate in (like chatting with Aleksandr the meerkat on Twitter or ‘Operation Tron’) then you will be on the right track to meme marketing success.