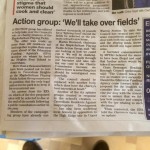 UPDATED (25/08/2015): I received a response from MPFAG and reproduce it underneath this initial letter to MPFAG.

There were a number of questions that came to mind when I saw that you were offering to take over as trustees of Mapledurham Playing Fields (MPF) from Reading Borough Council (RBC). I have seen this desire repeated several times in our local papers now, however no details have been published with regards to what you would do if you were to become trustees.

I believe that without the support of the majority of the Reading and Mapledurham Parish community it is unlikely that MPFAG will be able to become trustees of the MPF, in that respect, then, isn’t it right and proper that your plans be openly discussed and debated?

Although these questions would apply to any group wishing to take over as MPF trustees, I’d like to pose them directly to you as your group is the only one of which I am aware that has publicly offered to take over the trustee role from RBC.

I appreciate that some of these questions might essentially be different ways of asking around the same or closely related issues, however I think it is important that any group wishing to become trustees of MPF are transparent, consistent and accountable for their plans for our fields. The community for whom the trust has been established should be able to constructively discuss your plans in an open way.

In the spirit of transparency I shall update my blog (http://www.jasonmehmet.org.uk) with your response. I believe this is a quick and easy way for MPFAG to get it’s plans into the public domain without having the expense and limitations of printing and posting leaflets. I look forward to your reply and hope that our community can discussion your plans productively.

Please could you not share my e-mail address publicly. It may be possible to do this inadvertently by printing out my e-mail and sharing with your group, or forwarding this e-mail to your membership. Please don’t do this as the address from which this e-mail is sent is not public and I do not wish it to become public. This letter is publicly available here: http://www.jasonmehmet.org.uk/2015/an-open-letter-to-mpfag.

UPDATE (25/08/2015): I received a response from Martin Brommell, Chairman of Mapledurham Playing Fields Action Group, and quote it in full below. The response doesn’t answer any of the questions I ask, it does however reconfirm the singular purpose of MPFAG.

MPFAG think I should ask some of these questions of the current trustees, which is fair. However, I think that the attitude of the existing trustees is plain to see. As trustees of MPF, Reading Borough Council have not provided and do not now appear to have a long-term strategic plan for MPF. They have been content to let the existing Management Committee handle the site as it sees fit. In short, MPF has not been on their radar, until now.

This is a discussion a large section of the community is involved in, and this blog is public, so I’d be astounded if some or all of the trustees have not already seen my questions, so if any of them – or the Management Committee – can provide answers to the above questions I think that would give us all the foundation for some detailed discussions as to the future of MPF, as well as going a long way to dispelling the idea that has taken hold in some quarters that there is a concerted conspiracy to further develop MPF land after The Heights Primary School has been built.

Below is the response from MPFAG:

In response to your recent letter to MPFAG, I am happy to respond as follows.

The most important issue MPFAG face as a group is not determining what will happen should the existing Charity trustees either step down or be replaced. Our most significant concern is to examine the actions of the current Charity trustees. Indeed, it is probably safe to assume that Reading Borough Council will remain as trustees for a very considerable period (certainly while the EFA are trying to build a school on the Charity land). Perhaps it would be more appropriate for you to send a version of some of your questions to them?

I am sure you will also understand that we view it prudent to dedicate our resources to more urgent issues than answering your questions. In the meantime, if you want more generic information about the duties and responsibilities of a Charity trustee, you might want to refer to the very helpful and compendious material on the Charity Commission’s website.

How about a parent premium?