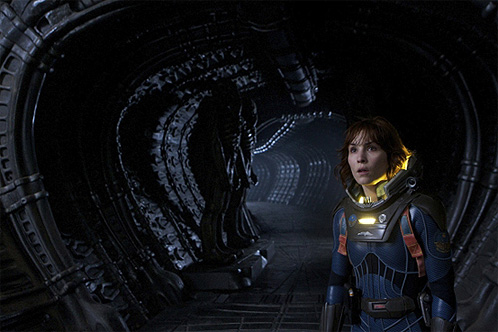 Well. Prometheus seems to be something akin to a well-known yeast-based product. You either love it or you hate it. Me? I love it.

I only saw the 2D version, but will likely make an effort to see the 3D version soon. I saw Prometheus with some friends who hated it, and who have now taken to sending me scathing attacks on the movie, apparently based on the fact that the science doesn’t add up.

Steven Novella, over on NeuroLogica Blog, sums up the groundswell of scientific attacks against Prometheus:

What I am not tolerant of, however, is gratuitous errors in science. There’s just no excuse for that in science fiction.

Here’s the thing. I love movies. I go to the movies to relax. When I’m at the movies I go through this not-amazingly-scientific process called ‘suspension of disbelief’. I stock up on very sugary snacks and drinks, switch off my mobile, and let the movie wash over me.

I do understand how annoying it can be if things disjoint you from a movie you are enjoying, but I don’t care if the science adds up or not. I really don’t.

From an IT perspective, that bit in Independence Day when Jeff Goldblum disables the defence system of a UFO using only his Apple laptop, I know it wouldn’t happen like that. And I know that an American Football player would not decide his agent based on shouting ‘Show me tha money‘ down the phone line. And, in fact, I love to watch Bruce Willis do impossible things against impossible odds in an impossible situation. I revel in it.

Sometimes I even watch bad movies just because they are so bad, they are great entertainment anyway, and can we really call a movie ‘bad’ if it entertains? Even if it makes you suspend disbelief for a few minutes and takes you into some weird world where your imagination is not constrained by… science?

Who, seriously, can argue with that?

But for all you science pedants out there, mull this over.

Human knowledge is not static. Science stands not still. Prometheus is set over 70 years into the future. Consider, just for a moment, that things have been discovered and invented that explain the incredible scientific gaps between what we know in the world we are currently experiencing and assume to be real, and what the fictionalcharacters in a fictional story in a fictional situation assume to be true of physics, geology, archeology, and biology/medical science.

Then stop losing sleep over it. OK?