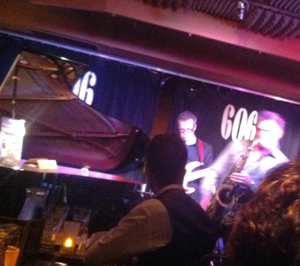 As you mature you begin to want – and expect – different things from a night out. As a thirty-something dad I don’t particularly want to go to a club where I can barely hear myself think anymore, and neither do the bunch of guys who I went to the 606 Club with. We wanted a nice night of chatter and food, and we weren’t too bothered about the entertainment to be honest. At least, we weren’t to begin with.

The 606 Club is everything you’d expect from a jazz club. On the way there my companions and I joked that it would be down a back street somewhere, and that we’d have to do downstairs to some underground hidey-hole. Sure enough, we weren’t disappointed when our bigotry turned out to be true. Oh how we chuckled self-satisfyingly to ourselves as we went downstairs.

But the clichés stopped at the door that night. The club itself was cosy small. Tables crunched close together. The assembled crowed was triumphant in diversity – which was a relief for us 30-somethings seeking to avoid the headache of a nightclub populated by little more than kids.

Before the music… the food. And again our expectations were confounded when we were served excellent fair. After a brief tussle we all threw caution to the wind and opted for a full three-course meal. For me, mozzarella and beef tomato with a pesto dressing for starters, followed by subtly spiced salmon and, whatever it was called, it was essentially top class mashed potato, coupled with fresh veggies. A number of us converged on cheesecake as our dessert of choice, and let me tell you that I savoured every mouthful, drawing out each morsel, which as my companions noted, is not my usual style.

Whilst we were chomping away, the music filled our other senses. And what a treat. That night it was the Derek Nash Quartet. Never heard of anybody in this band before, and like the 606 Club itself, and the food, my expectations were not high, but how wrong I was.

Nash has accompanied many great artists, but tonight he was accompanied by Gunther Kurmayr on piano, Phil Mulford on bass and Frank Tontoh on drums, each successful in their own right. I honestly did not know what to expect, and though I couldn’t name any song that was played, I can tell you the music was amazing. The quartet worked hard but made it look effortless, and the jazz solos that each member played out were, well, groovy man, but the clear stars of the show were Nash and Tontoh who seemed to be egging each other on to do more. 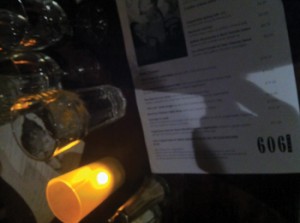 Nash showcased his talents as he fingers slinked easily up and down the various saxophones he brought out, Tontoh rocked it on the drums, sometimes teasing the crowd with the gaps he left between the beats and keeping the aficionados clearly present on their toes.

So a night of shattered expectations for me then. But in the best way possible. Banished were those Fast Show stereotypes of Jazz, shattered by the quartet that was refreshingly unencumbered by the need to be some polished pop band. No dance routines here. No PR guru manipulating an image. No soft-porn music video action. Just unadulterated music pleasure, about as far removed from easy-come-easy-go mainstream music as you can get, but yet so accessible.

In amongst his anecdotes and repertee with the crowd throughout the night, Nash was plugging his albums for purchase and asking us to find him on Spotify. I hope more people do because his is a talent that should be appreciated and rewarded, and the 606 Club is a place that deserves to prosper with a winning combination of atmosphere, music and food.

What’s the problem with public sector IT projects?
Lifting the Veil on this old debate