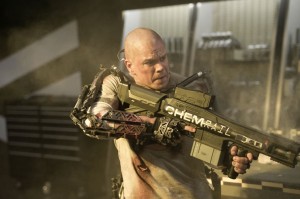 Matt Damon getting his gun on in Elysium

There is something familiar about Elysium. In fact, there are a lot of things familiar about Elysium, drawing, as it undoubtedly does on the usual sci-fi tropes. The dystopia of the future. Hi-tech droids. Unfeeling conglomerates that operate beyond the law, and so on, and so forth. Anybody with a passing interest in sci-fi has seen it all before, and yet, Elysium is still a compelling proposition for even the most hardened sci-fi fanatic.

Elysium is the second full-length feature film written and directed by Neill Blomkamp. His first movie was District 9, and if you’ve seen that movie, you’ll suddenly realise why Elysium seems so familiar, especially when you figure out that bearded-bad-guy-in-chief is Sharlto Copely who virtually stole the show in District 9.

Blomkamp brings the same kind of lo-tech gritty feel to Elysium that we saw in District 9. His future is not so much the dark industrial cityscape of Blade Runner, nor is it the slick future of Demolition Man, but it squats somewhere in-between – and is more believable for it. The juxtaposition of a diseased and crowded Earth with the healthy and wealthy space society of Elysium is deliberately highlighted.

It’s refreshing that the society of the future is not, apparently, populated by carbon-copies of today’s Americans. Up in Elysium there appears to be a President of Indian descent, and the scheming Secretary of Homeland Security – played by a deeply sinister Jodie Foster – seems to be of French origin. In the Los Angeles of the future there appear to be lots of Latinos.

The vast chasm between the wealthy citizens of Elysium and the down-and-outs on Earth is brought into sharp perspective when we see the Bugatti spaceship with separate compartments for the money-grubbing CEO of Armadyne and his 2 personal defence droids.

You’d be forgiven for thinking that there are no aliens in this movie. Of course, there are. This film addresses so many issues – illegal immigration, healthcare, defence, wealth and poverty, corporate greed and responsibility – that it’s impossible to address any of the issues in detail, but that’s OK, because you don’t need more than a sketch to get the point and move the movie on.

As in District 9, Blomkamp explores a kind of melding of man and machine which culminates in a titanic battle between – massively buff – Matt Damon and Sharlto Copely. The technology on display is not so far advanced from what we know now as to be conceivable.

This movie is not subtle, it’s a brutal slap to your cerebrum, with violent fight scenes taking you close to the struggle between life and death that hark back to Matt Damon’s portrayal of Jason Bourne. And we have seen the sci-fi ideas of Elysium before, there is nothing amazingly new here. But it’s the range of ideas, the depth of the thought and the overall execution that sucks you into this film.

TechNet and Xbox One : Microsoft Mistakes?
What’s the problem with public sector IT projects?