Liberal Democrats have been able to console ourselves with the idea that we are influencing policies from the sidelines of Government. But we know, now more than ever, that ‘influence’ is not the same as ‘power’.

We should not be happy with ‘influence’. Labour and the Tories understand that there is no point in naval gazing over the minutiae of a policy if you cannot implement it. As our new leader I hope you will take the lead in promoting a muscular self-confidence and a strong desire to win amongst the membership beyond the core teams at local level.

I’d like to take this opportunity to turn your attention to how the Liberal Democrats are organised. Even before entering coalition, there was already evidence that things were not right. People forget that we lost MPs in 2010 even before going into coalition. 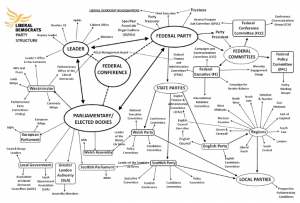 I have to ask you. Do you think  the structures and procedures the Party has in place are fit for practice?

If this structure could deliver Liberal Democrats to majority Government, or a large group of MEPs, would it not already have done so? Given the scale of our defeat in 2010, 2014 and 2015, shouldn’t it be a matter of urgency to organise the party into a force that can deliver victories?

In December 2014 Helena Morrissy updated us on the process and culture of the Liberal Democrats. Strong voices cautioned us to leave the re-organisation she called for until after the election. Now is the time to grasp this bull by the horns. There is a lot of work to do, but no shortage of ideas and energy to do it.

There should be no sacred cows. I can already hear the anguished cries of members who will vehemently disagree, but in the face of losing so many MPs and MEPs in 3 consecutive elections, the debate must opened – and not just on websites and in private forums, but as a proper dialogue directly between the Party and it’s members.  As leader, I hope you will take seriously the organisation and management of the Party, not just policies, public relations and Parliamentary battles.

Having recently taken the time to research the English Council Executive, I cannot express enough the pain it causes me that the Officers are overwhelmingly male, and, you guessed it, pale. It also seems to me that we are (self?) selecting and electing the same faces at various levels in the Party. Is it right that our own structures seem to  continuously concentrate power into the hands of the same people? I can’t believe that the pool of competent members is so small that we must re-elect the same people over and over again.

Following the recent surge of new members, perhaps now is the time to consider term limits for those sitting on various committees? This will ensure a regular turnover of people, give newer members a chance to participate at all levels, and changing the personal dynamics of these committees will open up them up to fresh thinking and new ideas. If there really is such a dearth of talent in the party, then perhaps we must put in place mentors and training schemes – open to all rather than a select few – for eager activists who want to serve the Party, but who need some guidance around the Party and how it works.

Our dilemma is clear. We must change the structure of the Party to be better able to win, whilst at the same time fairly and transparently distributing power amongst a more diverse set of members from all social and ethnic backgrounds, as well as new members and old stalwarts alike.

Committees should directly and regularly update members through official channels – this could be e-mail or even a printed or PDF newsletter distributed freely as a benefit of membership. I understand that the work of some of these committees must remain confidential. But surely not all of it. All the time?

Serious thought should also be given to allowing members who cannot attend regional or federal conferences – sometimes because of cost, sometimes because of the need to prioritise family care or work commitments – a more direct voice and a vote on policies and committee members. Technology has long surpassed the era of a limited number of Conference Reps with special lanyards and crucial voting privileges. People wanting to speak at Conference could be encouraged to send a video of their speech in to be played on the big screen. This stuff is not rocket science. Even less so for a party that prides itself on it’s commitment to science!

The disappointment in the reduction of Liberal Democrat MPs is partially offset by the increase in new and returning members who have joined the Party since the General Election. Amongst these members, I’ve no doubt, are not a few potential Lib Dem MPs and Comittee members. Let’s harness this talent. There is light at the end of the tunnel and I wish you all the best in guiding us out of this place and towards something better.