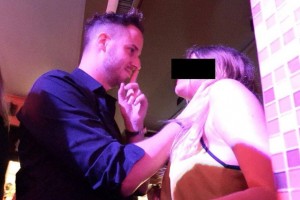 The issue of Julien Blanc is being framed in some circles as a civil liberties issue. It’s not. It’s a protection of civil society – in particular women – issue.

In 2010 Theresa May excluded Zakir Naik from entry in the UK because he had made comments that we’re evidence of “unacceptable behaviour”. Note. Theresa May had no evidence that he was involved directly or indirectly in an act of terrorism, but she excluded him anyway.

There was no high-profile MP to campaign about it. No cries of injustice on this particular curtailment of civil liberties. But on the subject of Julien Blanc, some liberals seem to be getting into a tizzy. It’s like there is a blind spot in their mind. Are we are so committed to being and acting liberal that we’ve forgotten that the State has a duty to protect?

If Theresa May was being consistent she would ban this so called ‘rape guru’ on the same unacceptable behaviour premise as she did Naik, and I suspect, and hope, she will.

I agreed with the exclusion of Naik, just as I agree with Lynne Featherstone on the exclusion of Julien Blanc . This guy is literally promoting the psychological and physical abuse of women. He wants to teach people how to lie and cheat for sexual gratification. It’s not about S&M, or informed consent. Quite the opposite. It’s about using tricks and techniques to get laid, nothing more, nothing less.

There is no grey area here.
It’s a struggle sometimes, but the UK must balance the values of liberty, equality and community. This means that rights of an individual do not necessarily take precedence over the rights of the community.

We bang on about equality and this is the moment where we nut up or shut up. This man specifically portrays women as objects to be manipulated, tricked and abused. If we are committed to equality, we will have no problem saying this man and his sickening ideology is not welcome in our community. He is free to go anywhere else that will have him to spew his women-hating bile. On his own Twitter and YouTube accounts, but not here. Not in the UK.

To permit this man into the UK to preach his particular brand of BS would certainly contribute to an already over-the-top objectification of women as purely objects for male sexual gratification. The point of excluding this guy would be to reduce the chance of harm being caused to anybody because of his actions, and also to deny him the opportunity to commoditise sexual assault. At £2,000 per ticket to attend his seminar, that’s some income to be denied.
Excluding Blanc is to avoid the normalisation of sexual assualt, and reduce the potential harm that could come to women who fall prey to men who actually pay to go to seminars run by Blanc.

But what’s the evidence against him? Well, in fact he’s locked his Twitter feed to new followers, he’s taken down tweets and locked videos and images that people have already pointed out as presenting the psychological and sexual abuse of women as being acceptable.

But here is what there is agreement from multiple sources on:

The facts are out there. This isn’t a knee-jerk reaction and it’s not populist to review the evidence and come to a conclusion that the presence of Blanc is “not to be conducive to the public good.”

Of course. I could be wrong. Perhaps Julien Blanc is a mis-understood soul, and he’s been taken out of context. Maybe he’s the victim of a vicious campaign of lies? All he has to do is explain himself. In the first instance we should stop him entering the UK, and as luck would have it, because he’s not an EEA citizen he can apply for a judicial review at which he could put his case. If he’s been wronged, I’ll be the first to eat my words.

Right now it’s a complete no brainier. He should not be allowed in this country.

Last year I wrote about a man who had been allowed to get away with multiple different abusive behaviours which culminated in the tragic death of 6 of his children, some of which Julien Blanc has highlighted as a checklist of what to do with women. Blocking Blanc from the UK is the first line of defence we have against this type of eventuality, and will go some way to sending a signal that this behaviour really is inaapropriate.

There are limits even to a liberal democracy. This is one of them.