By Jason Mehmet on December 8, 2014 in Business 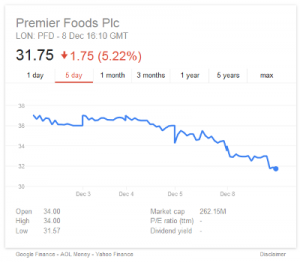 Premier Foods owns some of the best known food brands in the UK, and is one of Britain’s largest branded food producers. In 2013 Premier food’s sales were £849 million, with a trading profit of £138.9 million. Seemingly a Great British success story. So why are they asking suppliers for investment payments from their suppliers?

To a lay person, the ‘investment payment’ appears almost like a bribe to Premier to allow suppliers to carry on working with them. Premier implied that not paying an investment payment could lead to a supplier being ‘de-listed’, which means no more working for Premier Foods.

According to a Newsnight report on the 4th of December, Premier Foods’ demands for investment payments came via a letter signed by Premier Foods CEO, Gavin Darby, saying:

… we are aiming to work with a smaller number of strategic suppliers in the future that can better support, and invest in, our growth ideas … we will now require you to make an investment payment to support our growth…

It’s understandable to trim suppliers down to a more manageable number, Premier have over 1,000 suppliers. Asking suppliers to negotiate new deals based on the fact that they would receive increased business from Premier would also seem a much fairer strategy than asking for up-front investment from suppliers.

It’s shareholders that actually invest in Premier though, and those shareholders are voting with their feet. Since the Newsnight report ran, Premier has lost approximately 12% of it’s market value. Not only is the loss of market confidence in Premier a damning verdict on it’s treatment of suppliers and there for the strategy of the management team, it’s also a potential opportunity for any organisation with a taste for acquisition looking to snap up a food conglomerate to run the proverbial slide rule over Premier.

Although the debt could be a bitter pill to swallow. Premier Foods is carrying huge debt at the moment, both in a pension scheme and bank loans. Could requesting investment payments from suppliers be part of keeping the company going long enough to pay off it’s debts?

On top of all this, Business Secretary, Vince Cable, has said that Premier Foods could be said to be “demanding money with menace” and he has asked the Competition and Markets Authority to look into the case. The CMA is a newly minted government department formed by merging the functions of the old Competition Commission and Office of Fair Trading. If ever there was a department in need of an example to set, the CMA is such a one.

There is a certain irony that it was also Vince Cable who, in 2003, schooled Gordon Brown on the danger of debt in the UK economy:

…is not the brutal truth that with investment, exports and manufacturing output stagnating or falling, the growth of the British economy is sustained by consumer spending pinned against record levels of personal debt…

It took a few years, but that simple truth was finally borne out, and Premier Foods knows all too well the crippling effect of debt.

I wonder if, in hindsight, the leadership of Premier Foods still think the strategy of seeking ‘investment’ from suppliers was a valid one? They claim that the investment payments were “widely misunderstood and misinterpreted” and that they will now move to a programme of a “more conventional type of discount negotiation potentially based on price, value or volume based rebates, or lump sums”. This statement would indicate that it’s those outside of the Premier Foods management structure who did not understand the nature of the investment payments, and that they still think the strategy itself was fair and legal.

There are those who constantly opine that ‘red tape’ costs UK business too much. The CMA is exactly the kind of red tape that is needed to protect small business owners from being taken advantage of by an organisation with a potential monopoly.

If there are those in industry who think “pay and stay” policies are acceptable, they should be willing to test their strategy not just against public and shareholder opinion, but against the relevant regulatory authorities. Investing normally gives you a equity in a company, so if Premier Foods wanted to avoid misunderstanding, perhaps it should not have used the term ‘investment’ if it was not selling shares? And anyway, how attractive are a few shares in a company that has not paid dividends since July 2008?

Not all suppliers are disgruntled though. Responding to the negative publicity, on 5 December Premier released a number of supplier comments praising the ‘Invest for Growth’ programme. On the face of it, these were endorsements from companies that had paid money to invest in Premier Foods, and in return had received increased business from Premier which in turn enabled them to grow and take on more employees. Great news for the economy you would think, but which really begs the question, what happened to employees in those suppliers that provided a good service, but which could not afford to contribute to the investment programme, or who refused to do so for their own reasons?

At the core of this issue is a simple question. Is it healthy – or even acceptable – for any food producer to be building a supply chain the principle advantage of which being that it can offer ongoing investment payments, rather than offering consistent long-term value for money and a quality service rooted in ethical behaviour?